on May 01, 2020
To be clear...I've written a few books...I should say that I've written two books.
Of course, it's worth noting that one of those books is incomplete outside of NaNoWriMo requirements.
I've also written and sold some short stories on Amazon that I'll never share the links to under my real name. I will only admit to having written something that people have read.
I've never written anything that felt was worth putting out there under my real name. All of those projects have had things about them that I really enjoyed but I either lost interest or...I don't know what happened.
I know that I have a problem with perfectionism. I think that comes with anxiety. I don't know why perfectionism hits some parts of our lives and leaves others alone. If you do, please tell me.
Actually don't. It probably doesn't matter anyway. It's not like it would suddenly fix everything if I had a better idea of why my anxiety acts a certain way. 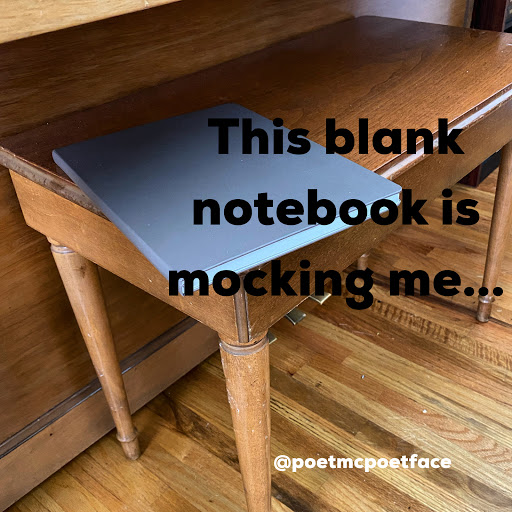 This is the post that I decided to put up today. It's masquerading as a legitimate Instagram post. The weird thing is, that notebook is like, brown. I don't know why it came out like that. I think I added that default filter that Instagram always asks you if you want to use but that was it. I don't think that would put a blue filter on it.
I'm not that good at blogging and I'm still sort of getting a feel for what I'm doing just now.
I started this post several days ago and I'm only just getting back to it.
The crux is that I have struggled with writing a book, any book for years. I've written them before but I can't stand that one that I finished and the other is not finished. The one that I did finish was a space opera that was supposed to be in the Amazon fanfiction program before it died for Lindsay Buroker's Fallen Empires series. She actually said that we could go ahead and publish the work with her blessing but I decided I would try to change it enough to have it be something of my own. When I went back in to try and change it/edit it--I fizzled out.
The first chapters that I had previously believed to be okay, had somehow become barely coherent garbage and I couldn't even decide where to begin to change the jumbled mess let alone change it to the extent of making it something of my own.
I've recently started a project on Wattpad but I'm going to just calm down and see what happens.
On a side note, for some reason, the idea of writing screenplays that will never be made into movies really appeals to me and I'm not sure why. Maybe I should do something with that.
adhd another stupid idea Blogging Daily - sort of Failure goals I'm really bad at labels and hashtags! mental health Random what am i doing Writer's Block writing