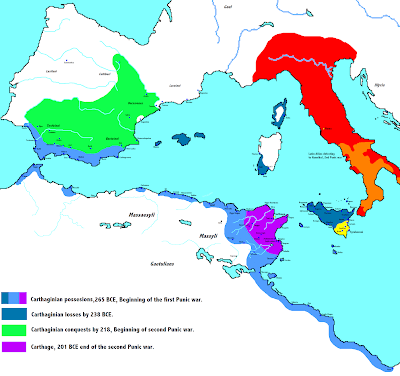 Fact of the day: Ancient Carthage was once located in present-day Tunisia and, in fact, ruled over the Carthaginian Empire.

So, here we are again. Just writing stuff out on here for people to read.

Nine times out of ten I start writing on this vlog again in order to clarify what I'm doing on another sort of social media--or to put out some incredibly overreaching and misguided goal for some new or old interest that I will spend the next two weeks obsessing over.

I could tell you my reasons for posting today...but then I'd have to kill you. In the end, you shall have to satisfy yourself with whatever your precious little mine can come up with.

I'm tired today. The wife and kids are out of town and I think it's just throwing me way off so I haven't been sleeping well. I've been trying to get things done around the house and because of that, I haven't been going to the gym. I'll start back up into it next week, though...more than likely.

I put the thing about Carthage at the top of the post today because I wanted to mention Carthage and because, in the off chance that anyone reads this, I didn't want it to be a complete waste of time.

It cooled off a little earlier in the week, so I've been sleeping with the windows open. But, it's getting hot again...so, I'm not going to be doing that much longer.

Yesterday, I met with my daughter's teachers to talk to them about keeping her safe with all of her medical problems during the school year. I think that the meeting went well.

After that, I had to take the modem into the Comcast store to switch it out for a new one. It was actually a surprisingly simple process and I was surprised when I walked out of there with nobody trying to upsell me on anything.

By Javierfv1212 (talk) - Own work (Original text: I created this work entirely by myself.), Public Domain, Link
Daily - sort of Facts Random