on April 23, 2019
While I'm working on a more relevant post regarding contemporary writing resources, here's this.


Since I'm still on my poetry kick. I thought that I'd share one of my poetry heroes. So far, the people whose poems that I would most like to copy (ahem) I mean emulate artistically are Maya Angelou, Rudy Francisco, and Mark Twain. 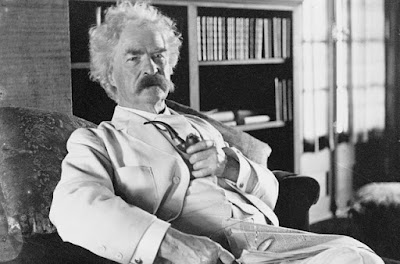 Image by skeeze from Pixabay

I've always been a fan of Mark Twain (Samuel Clemmens), with his pithy quotes and stabbing with. His poems are just as fund as his short fiction.

is chiefly prized because of its rarity.

Geniuses are people who dash of weird, wild,
incomprehensible poems with astonishing facility,
and get booming drunk and sleep in the gutter.

Genius elevates its possessor to ineffable spheres
far above the vulgar world and fills his soul
with regal contempt for the gross and sordid things of earth.

It is probably on account of this
that people who have genius
do not pay their board, as a general thing.

If you see a young man who has frowsy hair
and distraught look, and affects eccentricity in dress,
you may set him down for a genius.

If he sings about the degeneracy of a world
which courts vulgar opulence
and neglects brains,
he is undoubtedly a genius.

If he is too proud to accept assistance,
and spurns it with a lordly air
at the very same time
that he knows he can't make a living to save his life,
he is most certainly a genius.

If he hangs on and sticks to poetry,
notwithstanding sawing wood comes handier to him,
he is a true genius.

If he throws away every opportunity in life
and crushes the affection and the patience of his friends
and then protests in sickly rhymes of his hard lot,
and finally persists,
in spite of the sound advice of persons who have got sense
but not any genius,
persists in going up some infamous back alley
dying in rags and dirt,
he is beyond all question a genius.

But above all things,
to deftly throw the incoherent ravings of insanity into verse
and then rush off and get booming drunk,
is the surest of all the different signs
of genius.
Mark Twain
Read some of his other work at PoemHunter
I'm really bad at labels and hashtags! Mark Twain poetry writing Writing Resources