on August 06, 2018
Finally made myself a smoothie again on Wednesday morning for breakfast. I'll include the rough recipe below. I think that it's pretty healthy and there's no reason that you couldn't substitute one thing for another since I'm not a dietician. 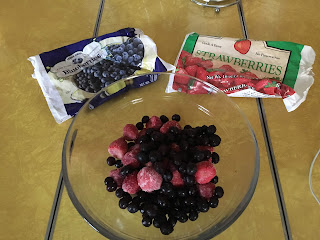 I primarily used Berries and Greek Yogurt. I think that you would be hard pressed to mess that up. The funny thing is that the instigator for me finally breaking out my little personal blender again was because I had tried to buy Carly an avocado. It's one of the tastiest things that she can eat on this diet but she has trouble ever finding one at the right stage of ripeness.

Anyways, the answer to the question that you are all screaming at your computer right now is that this avocado looked good--until Carly shoved her fork into it. She then mentioned that it was probably okay to put into a smoothie but that didn't sound good to her at the time and she went to toss the whole thing in the garbage.

That's when I stepped in and saved the half of the avocado that Carly had not tried to eat and put it in my blender with frozen blueberries, strawberries, and greek yogurt(not frozen).

I also sometimes use something called Macha powder(from South America) as well as some chia seeds. And that was pretty much it. Sometimes I put in a flavored fat-free Greek yogurt or some fat greek yogurt but I don't think that I did on that day.

I was surprised to find that the smoothie actually tasted pretty good, and I got all of the healthy avocado fats!

Let me know in the comments what the weirdest smoothie that you ever made was.
Fitness Foods Healthy Dad Writer